Your browser is no longer supported

You are currently using a browser that is no longer supported, and may contain security vulnerabilities. To get the best experience with www.albertafamilywellness.org, we suggest using a newer version of Internet Explorer/Edge or using another supported browser such as Google Chrome.

Who We Are > Expert Oversight > David A. Dodge 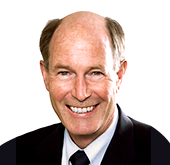 After serving in a number of increasingly senior positions at the Department of Finance, including that of G7 Deputy, he was Deputy Minister of Finance from 1992 to 1997 and Deputy Minister of Health from 1998 to 2001. Mr. Dodge, who was appointed Governor of the Bank of Canada in February 2001 for a term of seven years, retired in January 2008.

From 2008 to 2014 he was Chancellor of Queen’s University, and a member of the boards of directors of Scotiabank, Canadian Utilities, and ATCO Limited. He is currently Senior Advisor at Bennett Jones, one of Canada’s leading law firms, and is a member of the board of the Canadian Institute for Advanced Research, and Chair of the C.D. Howe Institute's National Council. In 2009, he was elected a Fellow of the Royal Society of Canada.